What is the Alabama Preservation Alliance? It is the only statewide volunteer organization devoted to preserving the cultural resources of Alabama's rich heritage. Our membership is open to everyone, and includes local historical societies, neighborhood organizations, and other preservation groups.

The Alabama Preservation Alliance is an action group. We are not afraid of speaking out and acting out to ensure the protection of historic resources across the state. We work closely with the National Trust for Historic Preservation, as well as with existing state agencies. With the hiring of our first full-time executive director in 1998, the APA took an even greater step at being an effective voice for preservation in Alabama. 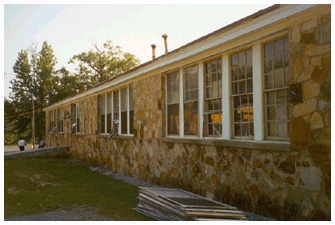 In 1998, the APA worked with concerned local citizens and had an injunction filed to stop the demolition of the historic WPA-era Skyline School in Jackson County. Working closely with the Alabama Historical Commission, we helped prove to the school board it was more cost-effective to rehabilitate the existing building than to build a new one. Today the school stands proudly restored and in use-- a nationally-recognized model of how local citizens can work with their state non-profit preservation group and the state historic preservation office to save the places they care about.

The APA also works in the halls of our State Legislature to ensure the passage of legislation that benefits preservation. In 1999, we were instrumental in guiding the adoption of the Alabama Underwater Cultural Resources Act. In 2000 we were partners with groups such as the Alabama Environmental Council in promoting the passage of the Scenic Byways Bill.

Created in 1994, our Endangered Properties Program--which is a cooperative effort with the Alabama Historical Commission-- is one of the APA's most effective ways to identify and publicize those historic places in the state that are in grave danger of being lost. 77 sites (and categories of sites) have been highlighted through the program since its inception. Hope and help are offered to these and other threatened structures through the APA Critical Response Fund and through our Revolving Loan Fund, which provides interest-free loans to specific restoration projects.

We partnered with the Blountsville Historical Society to help weatherproof the c. 1835 Copeland House--Blount County's oldest brick residence and a 1997 listee on our Places in Peril.